Glen Elgin Distillery nestles quietly in the heart of Speyside. Situated approximately three miles (4.8 km) south of Elgin on the road to Rothes, it was the last distillery to be built during the boom years of the 1890s. The architect, Charles Doig, stated it would be the last one built in Speyside for 50 years. His prediction was remarkably accurate with Tormore being the next distillery built, in 1958.

Initially Glen Elgin did not have problems to seek. The owners, William Simpson, a former manager of Glenfarclas, and James Carle, an agent for the North of Scotland Bank, saw their investment of £13,000 plummet to £4,000 when they sold the distillery in 1901. The original site was chosen for its water source and close proximity to the railway line. Unfortunately the water source proved unreliable and permission for a railway siding was refused. The distillery soldiered on through several owners before becoming part of DCL in the 1930s. It was then licensed to White Horse Distillers Ltd.

Until the 1950s the distillery was entirely operated and lit by paraffin. All machinery was driven by a paraffin engine and a water turbine. It was a full-time job to keep the paraffin lights burning. Today, the distillery still proudly depicts the White Horse emblem and is part of UDV's "Elgin Group", along with Linkwood, Glenlossie and Mannochmore. The whisky is still a key component of White Horse blended whisky, which is exported to over 200 countries worldwide.

When walking around the distillery you are struck by the contrasts of old and new, big and small.

The distillery has a huge storage capacity for malted barley. The 36 malt bins can hold 400 tonnes—more than the three other distilleries in the Elgin group combined. However the ISR (intermediate spirit receiver) which collects the spirit from the stills is very small and has to be pumped empty three times a day.

Recent investment has seen a new full lauter mash tun installed, replacing the old traditional tun with its geared rakes. The mash is now continually sparged as opposed to adding separate waters. The worts however are transferred to traditional wooden wash backs for fermentation. The distillery's floor maltings were decommissioned in the 1960s with the malt being supplied by large industrial maltings. However, worm tubs were retained for the cooling of the distillate.

Although the distillery has seen major refurbishment it retains the look and feel of a small, traditional distillery. There are no space-age computer panels and the highly regarded whisky continues to be made with a hands-on approach.

The stills and worms

The Glen Elgin spirit and wash stills are similar in size and shape, although the spirit stills have a flatter pot. There is a gentle incline on the lyne arms which lead outside to the worm tubs.

The distillery operates a balanced distilling process: each wash back provides six individual charges for the wash stills; two wash distillations make up the charge for a spirit distillation. This makes for a busy shift in the still house with nine separate still charges to be made.

Using worm tubs as opposed to condensers to cool the distilled vapours adds a depth and richness to the spirit. An added bonus are the fresh water shrimp that thrive in the tubs. 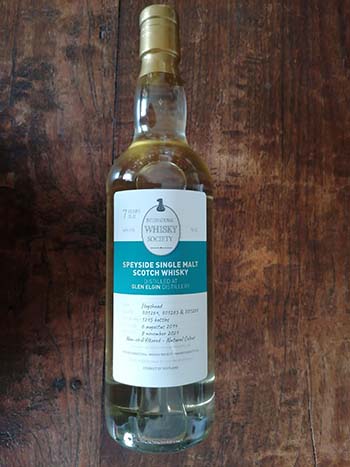 Allt-a-Bhainne omschrijft zichzelf als:
We're not your typical whisky. Born in the 1970's, we're proud to stand from the crowd. Why not take a walk on the wildside, not a dram by the fireside. With notes of soft red apples, sweet runny honey, delicate smoke and toffee. The perfect pairing of peat and sweet. The new single malt on the block for a new generation of drinkers. Allt-A-Bhainne, the sweetly peated single malt since 1975... 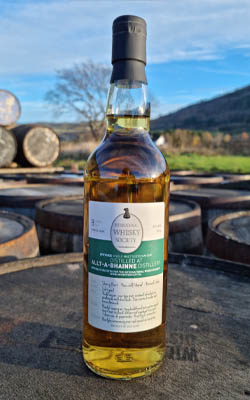